Have we seen the bottom already?

Well, what an amazing week Wall Street had last week. Despite starting with a fairly sizable down day on Monday, and finishing with a similar-sized down session on Friday, all three of the major indices pounded out massive gains midweek to breathe signs of life back into investors portfolios around the globe.

During Tuesday, Wednesday, and Thursday the Dow Industrial Average gained a whopping 20%, in what was its biggest three-day session since 1931. A lazy 89 years ago. Its 12.8% gain for the week was its best since 1938, a time when the US was coming out of its second recession in five years.

The S&P500 managed a 10.3% weekly gain, which was its best since March 2009. The ’09 bounce occurred just a few weeks after markets were to reach their lowest levels of the GFC, and just over eighteen months after the S&P500 had come off of its all-time highs.

The Nasdaq closely followed its two bigger brothers with a 9.1% gain, after being held back by the FAANG stocks on day five. It was also the tech-laden index’s biggest gain since March 2009.

There were also many notable performers among individual stocks throughout the week. None with a higher profile than plane maker Boeing (BA) who gained an unheard of 70.5% over the five sessions, despite falling 10.27% on Friday. To put the gains in perspective, however, the stock is still down more than 60% from its pre-737 max grounding days of the early 2019’s and is still facing a long and rocky road back to recovery.

The Tuesday session, where the Dow had its best single day since March 1933, saw many big names have record sessions. Oil company Chevron rode a bounce in the oil price to gain 22%. Credit card provider American Express (AXP), Boeing (BA), and Delta Airlines all made more than 20%, while General Motors (GM) picked up 19%.

None had a better day than Norwegian cruise lines (NCLH) however. They jumped 42% on Tuesday, then spiked again on Thursday, before falling back with the rest of the market on Friday. It was an interesting rally for one of the main players in the beleaguered cruise line industry, where investors are weighing up whether there will be any demand for business once the COVID19 drama dies down. It’s not hard to imagine cruise-goers hesitating after ships have been found to be hotbeds for virus spreading. I’d certainly be having second thoughts. 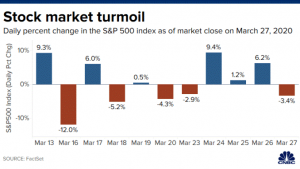 So where did this market bounce come from you may be asking? It’s a fair question considering we are in the midst of a global pandemic that we don’t yet know the full ramifications of. Not surprisingly it was a combination of the Federal Reserve and the US Government producing massive stimulus packages that buoyed investors.

The Fed for their part, on top of bringing interest rates to near 0% in the previous week, has offered an unlimited stimulus fund for buying US Treasuries and mortgage-backed securities. You can call it the “Powell Put”. During the GFC the Fed poured more than $4 trillion into the financial system throughout the period, and many are suggesting that figure could be matched within weeks given the damage the lockdowns are doing to the economy.

The Federal government have also managed to pass their own $2.2 trillion coronavirus stimulus plan called the CARES act. It is the largest rescue package in US history. The funds will cover loans to big companies and small businesses, cash payouts to most Americans, business tax cuts, increased unemployment benefits, funding for hospitals, increased spending on education, as well as reductions in individual taxes.

So now that we have this massive cash boost is the economy in the clear? Should we be loading up our portfolios ready to ride the market to new highs? Well, unfortunately, it’s not that simple. Chief global equity strategist for Goldman Sachs Peter Oppenheimer suggests there are four requirements the market needs to see before it stabilises. These are ″(i) A sign that the policy intervention is sufficient to prevent severe second- and third-round economic shocks; (ii) A sign that the infection rate is reaching a peak; (iii) A sign that the economic downturn may be slowing; and (iv) Cheap valuations”.

Trump’s tweets later in the week, where he hoped to open everything up again by Easter, spooked markets concerned about such second and third-round shocks expressed by Oppenheimer earlier in the week. Luckily, over the weekend this date has now been moved back to the 30th April, and will no doubt be adjusted again depending on how the virus is managed domestically.

And don’t forget, the market is not averse to throwing in a fake rally or two in times of distress. Back in October of 2007, we had a 24.2% rally before the market eventually saw a bear market low of -56.8%. Again during the dotcom crash of 2000, we saw markets rally 21.4% before hitting bear market lows of -49.1% soon afterwards. In 1987 we had a 14.9% bounce before hitting lows, with the biggest of all occurring in 1937 when markets recovered 62.2% before ending up down 60.0% in total. It’s called a head fake in the market and it happens on a regular basis. 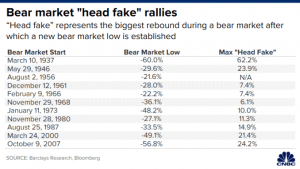 That doesn’t mean there’s not a great buying opportunity in the offing. Very shortly we are going to be presented with a once in a decade buying opportunity. Maybe, just maybe, it is here now, but don’t get too excited and throw everything in at once, just in case we are only seeing another market head fake. Always buy on the dips, put a little in and hold off using all of your ammunition in case we get a better buying opportunity later.

When you are ready to invest and looking for ideas on what to buy you can check out Matt’s Pandemic portfolio he’s putting together on our blog page. You can find it here: https://capital19.com/investing-in-us-stocks/the-pandemic-portfolio-update/

In the week ahead we’ll be getting our first taste of what the pandemic has done to car sales, manufacturing, services and employment. On Thursday last week, we saw weekly jobless claims come in at 3.28 million. By far the highest number we have ever seen, the second highest being just 695,000 back in 1982. The non-farm payrolls that come out on Friday will be an interesting read no doubt.

The bad news is priced in on all of these reports. Everyone knows they are going to be terrible. What’s really going to matter are the COVID19 case numbers and whether they accelerate or are slowed. As Oppenheimer said above, we want to hit the peak and see the numbers head down and stay there. That’s when this market will take off for real.