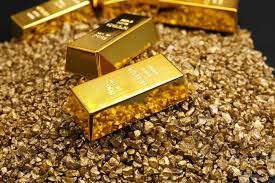 Posted at 15:41h in Investing in US Stocks, Stock Report by Paul Levett
0 Likes

I’ve never been much of a gold bug. I can’t remember ever advocating for buying gold, seeing it as more of a sparkly metal that looks rather nice on jewellery as opposed to a monetary safe haven for doomsday investors waiting for stock markets to crash. My feeling has always been if the world order collapses who’s going to need a shiny metal that looks nice. Give me food, water, oil, transport and weapons thankyou very much.

However, there was a time when Gold did play an important role in the currency framework. The Greeks and Romans started using it as actual currency from around 560BC, and it’s believed Western and Central Asian populations were trading in metals approximately 400 years earlier than that. The British started using Gold and silver from 775. And in the US the government set up what was called the bimetallic standard in 1792, which meant that every dollar in circulation (usually a cheap metallic coin) had to be backed by either gold or silver (where one US Dollar was equivalent to 24.75 grains of gold).

Paper currency was first used in China but the idea didn’t really take off until travellers introduced the concept into Europe, and around the time of the early renaissance promissory notes and bearer bonds began to overtake the use of metal as a currency. In 1661 Sweden became the first European country to introduce a government-backed banknote. The US started printing notes in 1913 and by 1934 had stopped minting gold coins. The gold standard itself was abandoned in 1971.

So gold hasn’t been used to back the US dollar or any other major currency for almost 50 years. Yet still, one-fifth of the worlds above-ground gold supply is held by central banks or financial organisations like the International Monetary Fund. And there is no doubt that while investing in gold over a prolonged period won’t get you the same results as investing in the S&P500 in the same timeframe, in times of market turmoil gold has continued to be a safe haven for investors and will beat the markets every time.

Rightly or wrongly gold has always managed to hold most or at least some of its value in times of political or economic turbulence. Empires have fallen, countries have collapsed, currencies have been obliterated, yet Gold still keeps chugging along. It’s why you will still see a flight to gold even today as markets crumble. It may not be as pronounced as what it was in the past but it still happens.

Part of the reason for this is it has been a valuable hedge against inflation and deflation. If you had $2000 US in cash back in the 1940’s you could have bought yourself a lovely five-bedroom house on large acreage. You wouldn’t be able to buy a decent size shed with that same $2000 today. But if you had owned $2000 worth of gold and held onto it over the same period, it would be now worth somewhere in the realm of $200,000. Likewise, deflation on a global basis hasn’t been seen since the Great Depression of the 1930s, but back then the gold price went ballistic as economies slowed and debt spiralled out of control.

So while I’ve never been a gold bug you just can’t deny that the shiny metal increases in value when things look grim. I’m not suggesting buying and holding gold long term. I’m just saying that it could prove a very useful hedge over the coming twelve months as a way to protect your stock portfolios if the coronavirus pandemic continues to impact economies, and central governments continue to increase debt around the globe. It doesn’t hurt to hold a little bit of insurance does it?

It certainly has never been easier to invest in gold. Modern markets have opened up a myriad of new ways. Of course, you could buy a few bars of the precious metal and keep it hidden under your bed. But there are much easier options that don’t involve you risking having it lost or stolen. And you don’t even have to get off of your couch.

You can trade the futures contract (GC), however, you need a fair whack of cash. Around $180k for 1 contract at the current prices, and $90k for the e-mini (QO). It’s much cheaper using options to get a smaller piece of the action. It cuts down on risk and it’s quite simple if you know what you’re doing. Speak to your advisor if you’re not sure how to do this.

And then, of course, there is investing in Gold companies and Gold ETF’s. Investing in a Gold ETF is as easy as buying and selling a stock. Some are benchmarked by the price of gold bullion, like the SPDR Gold Trust ETF (GLD). While some invest directly in a mix of different mining companies such as the VanEck Vectors Gold Miners ETF (GDX) which holds shares in 46 major mining companies such as Newmont Mining Corp (NEM) and Barrick Gold Corp (GOLD). If you would prefer to invest in small-cap miners who specialise in gold only you can buy the Sprott Junior Gold miners ETF (SGDJ).

If you’re looking for leverage you can try the Direxion Daily Gold Miners Bull 3xETF (NUGT) which tracks gold miners or the ProShares Ultra Gold ETF (UGL) which tracks gold bullion. There’s plenty of choice at any price point, depending on what you are after. Just speak to your advisor if you would like a hand in buying the one that’s right for you.