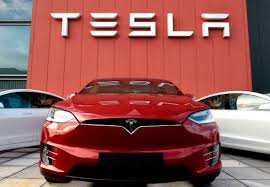 Posted at 16:22h in Investing in US Stocks, Stock Report by Matthew Jones
20 Likes

Everyone is talking TESLA (TSLA) this week as the electric car maker stock looked more like a SpaceX flight to Mars than a small volume automaker. At the stock’s peak price this week Tesla was valued as the second biggest car maker in the world behind Toyota who sold 10.7 million cars in 2019, roughly 30 times as many as Telsa delivered last year.

It is hard to justify the stock’s current price around $750 when you look at just the fundamentals and compare it to the other car makers. But that is the mistake the bears are making with Tesla. For Tesla should not be viewed as a carmaker for valuations. It makes more sense to think of Tesla like the other fast-growing tech companies like Amazon (AMZN) and Google (GOOGL). For, like them, it is an industry disrupter and business pioneer.

So exactly what did cause Tesla stock to surge 46% in just two days? 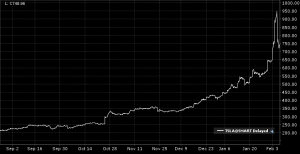 The price movement started with the announcement of a record delivery of vehicles in the last three quarters of 2019 that unexpectedly met Musk’s aggressive promise of 350,000 – 400,000 deliveries. The Shanghai Gigafactory has finished ahead of schedule, a Berlin Gigafactory is expected to start production next year, the Model Y is ahead of schedule and the company blew Q4 estimates out of the water.

All that good news upset the short sellers. At one point Tesla was the most shorted stock on the market. When the buyers sent the stock up on this positive news the short sellers had to buy back their shorts to stop the loss. One report claimed those people short Tesla lost $1.5billion overnight when the stock jumped.

So, we had good news buyers, then short sellers and finally the FOMO (fear of missing out) guys all plunging in at the same time.

Comparing it to the competition

The other 3 big US automakers, Ford (F), General Motors (GM) and Fiat Chrysler(FCAU) have had a tough few months. These firms have all seen declining sales and profitability in Q4. Tesla on the other hand is growing sales at 30% a year with a profit margin in excess of 20%. There is no doubt Tesla is taking market share from these companies.

Volkswagen CEO, Herbert Diess said “We are valued like an automobile company, while Tesla is valued like a tech company” Diess also argued against comments that Tesla was too small saying “Tesla is not niche. The Model 3 is a large-series model and they are one of the biggest manufacturers of electric-car batteries”

Placing a value on Tesla is not easy. Tesla is currently trading on a sales multiple of a little over 4. That is very similar to tech stalwart Intel (INTC) and a far cry from chip innovator NVIDIA (NVDA) which is trading at over 10X sales.

So even after such a run up in price there could still be significantly more upside to come. Ark Investments, which is fund, says there is a 25% chance Tesla hits $15,000 per share in 2024 and their view is the largest revenue driver will be robotaxis.

For me, I wouldn’t rush out and buy the stock now at $750 after such a meteoric run up. But if the chance came to pick it up closer to $500 then I would not hesitate.

The author does not hold any shares in Tesla and has not been remunerated for this report.