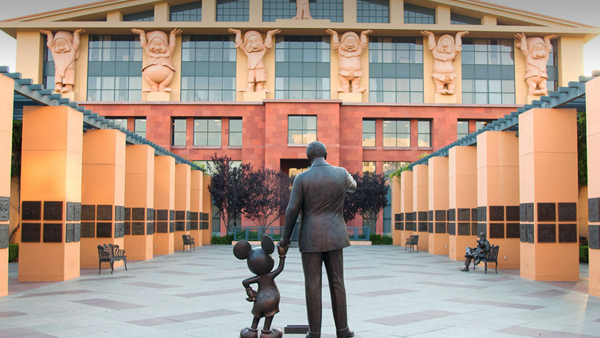 Posted at 11:34h in Investing in US Stocks, Stock Report by Michael Smith
15 Likes

After nearly one hundred years, Walt Disney has become synonymous with media and entertainment. It’s a household name right around the world through its generations of films, merchandise, music, television coverage and theme parks.

Whereas Facebook (FB), Twitter (TWTR) and Netflix (NFLX) have become the most watched entertainment stocks in recent years, The Walt Disney Company (DIS) was the early trendsetter. The first common stock was issued in 1940, after which it traded as an over-the-counter (OTC) stock (Walt Disney Productions) in 1946.

During the 50s the company rebranded. It introduced a series of successful animation films like Cinderella and Alice in Wonderland, produced live movies, began TV shows and opened Disneyland. In 1957 it then listed on the NYSE. Even at this point, the business was largely a family affair, with Walt Disney, his brother and their wives owning a large portion of the company via trust.

Despite a series of stock splits over the years, the company’s share price has continually surged on the back of hit media releases, international expansion and mega acquisitions – making it one of the best-performing stocks on the NYSE of all time. So how can this growth be maintained in the future?

A box office bonanza will keep the till ringing.

It’s been a year to remember for Disney at the cinemas, and it’s not even half way yet. The company’s final instalment in the Avengers franchise, Endgame, has smashed box office records, closing in on US$3bn in gross ticket sales. Not only is it Walt Disney Studio’s most successful film, but it enjoyed the biggest worldwide open of all time, is the fastest film to surpass US$1bn, and the second-highest grossing film of all time.

While much of that success is baked into the share price, attention is turning to the company’s other films. The likes of Toy Story 4, as well as upcoming big-name films – The Lion King, Spider Man: Far From Home, Frozen 2, and Star Wars: The Rise of Skywalker – are expected to drive huge sales.

Add in the likes of Black Panther 2, Avatar 2, Indiana Jones 5, and other Marvel films, there is unprecedented upside here in the medium term. Disney is staring at an enormous couple years at the box office ahead and the records already set by Endgame may pale in comparison. With so many of these films being sequels or live remakes, expect merchandise sales to be through the roof also.

Making the most of a changing media landscape.

Netflix has revolutionised the way we consume media and entertainment. Subscription video on demand (SVOD) has largely cannibalised the audience of major broadcasters. Disney and the newly acquired 21st Century Fox have seen the effects of this, with declining audience penetration.

Aware of this, Disney is set on shaking up the digital streaming market. The media giant will release its own subscription service in November called Disney+. Subscribers will have access to original content, plus entertainment from Pixar, Marvel, Star Wars, the Disney archives and Fox, including National Geographic.

Disney will invest significant capital into the service as it shifts its strategy to incorporate a digital future. And while this may drag on short term earnings, it bodes well for long term growth and income diversity. The company also offers ESPN+ and Hulu, two other subscription services with 2 million and 28 million subscribers respectively.

While it is not until 2024 when Disney+ is expected to turn a profit and reach 60-90 million subscribers, adoption could easily outperform expectations. Consider that the company is pitching Disney+ to kids and families, Hulu to adults, and ESPN+ to sports enthusiasts and entertainment venues. Therefore, the prospect of future bundle offerings could help the company poach subscribers from Netflix, especially since Disney+ will be nearly half the price of Netflix.

Move over Disneyland, this could be the happiest place on earth.

Disney’s long-term success has centred on a diverse income strategy including theme parks and resorts. Coming off a base of US$20bn in revenue last year, the company announced in its most recent quarter higher spending and longer stays at its parks and resorts. Disneyland may be the most popular among these, but future developments bode well for growth.

Not only does the company have a Marvel-themed park in the works, but it is eagerly awaiting sales from two new Star Wars themed parks on both coasts of the US. With one of the Star Wars Galaxy’s Edge parks already open, and the other set to open before Star Wars: The Rise of Skywalker hits cinemas, the timing couldn’t be better.

The opportunity for ticket sales and merchandise to soar through the roof is distinctly possible, with early signs promising. Once the hype of the next film sinks in, and Disney’s live series production commences on Disney+, the company’s strategy to capture cross-divisional sales through high profile releases will bear fruit.

The Walt Disney Company has demonstrated a proven record of turning its monetized media entertainment offering into success for shareholders. On just about any timeframe, Disney stock has performed tremendously.

Momentum is now in play from a swathe of high-profile box-office releases plus new theme parks and resorts which are sure to see the company’s revenue accelerate. A significant sum has been spent acquiring Fox, diversifying Disney’s offer. With its significant free cash flow, the company has increased dividends and is tipped to recommence its stock buyback in the near-to-mid future.

At the same time, Disney is investing heavily in a strategy that will see it adapt to the changing media landscape. With every belief that it can take market share from Netflix on account of its value pitch and potential bundle offering, the results are likely to be rewarding for consumers and shareholders alike.